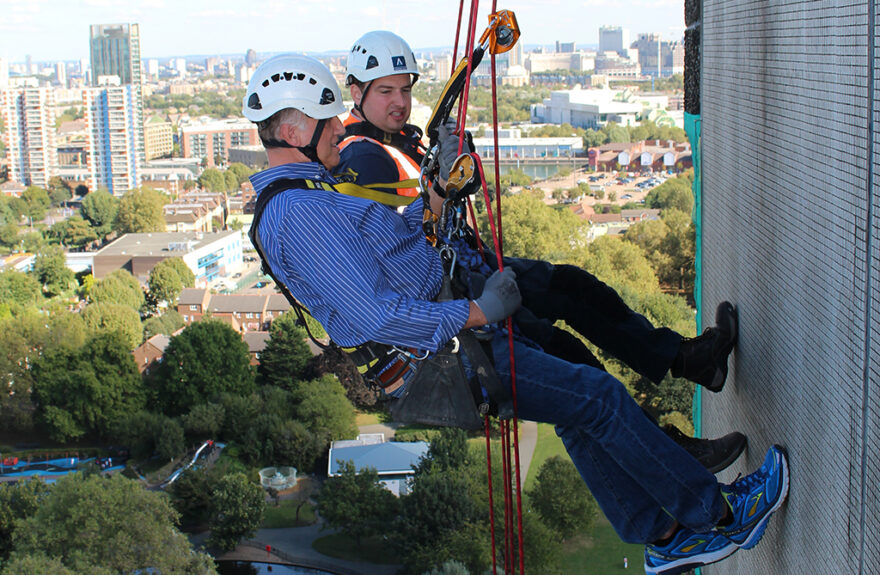 Some of our Surveyors like to live life on the edge, and we mean this literally as last Friday five of them abseiled down the 24-storey Maydew House in Southwark to raise money for local charities.

Alex Burton, Dan Simmons, Francisco Gomez, James Paul and Guy Rapley were joined by the Mayor of Southwark, Kath Whittam and staff from Southwark Council, along with Keepmoat and British Land in this extreme challenge, s undertaken to raise money for the Mayor’s charities including the National Autistic Society, Bede Centre and Bermondsey Kitchen.

The abseiling was conducted by Avalonpro and a member of their team joined every volunteer on their descent of the tower block.

The volunteers explained that the most nerve-racking moment was having to go over the edge of the roof; the key piece of advice was ‘don’t look down!’

Maydew’s roof offered some stunning views across London’s skyline, to distract the team, and the weather couldn’t have been better with Maydew House bathed in sunshine.

The Mayor of Southwark, Kath Whittam made her way down the 24-storey building closely followed by Guy Rapley, who sped down in record time! Alex, Francisco, James and Dan also made it to the bottom and in doing so helped raise much needed funds for Southwark charities, including the Bermondsey Kitchen who was on site providing refreshments for the eager and slightly apprehensive volunteers.

The challenge, extreme as it may have been, has helped raise a huge £1,559.73. Well done team calfordseaden, to all those who abseiled and to everyone that helped make the event happen!