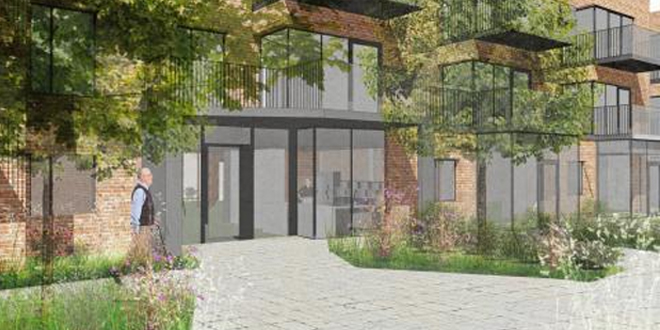 Walthamstow’s oldest charity has signed contracts for the building of 20 new almshouses and appointed calfordseaden as Project Management, Employer’s Agent and Clerk of Works services for the delivery of these new homes.

The history behind the scheme dates back to 1527, when Sir George Monoux built a school on the land as well as thirteen rooms for the elderly poor of the Parish of Walthamstow. Almost 490 years to the day, the Walthamstow and Chingford Almshouse Charity will take possession of twenty new apartments on a site just 200 yards from the plot where the original building still stands today.

Each apartment will have a large living room, double bedroom with en-suite bathroom and fully fitted kitchens. Two of the ground floor apartments will be fully wheelchair accessible. The building will also have a guest suite for visitors or carers who need to stay overnight and a room for residents and visitors to socialise in and take part in other activities.

Jill Renshaw, who chairs the Charity’s Development Committee which oversaw the design and planning of the new building, said, “Our design team, led by architects, Pollard Thomas Edwards and managed by calfordseaden, have done a great job and having seen the quality of Kind & Co’s work elsewhere, we are confident they will deliver just that.”

An application has been made to name the new building “Colby Lodge” in memory of Thomas Colby, one of the early Schoolmasters and a benefactor of the Charity in the late 16th and early 17th Century, who died of plague in 1609. The building is planned to be handed over to the Charity on 19th June 2017 who will work with Waltham Forest Council to choose the first residents.