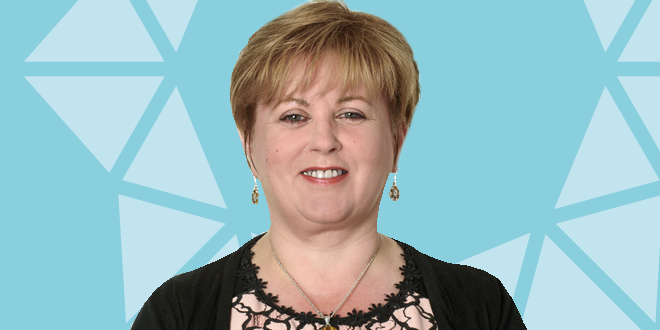 Jacqui Clarke joined calfordseaden in May 2003 as an Admin Assistant. Now, almost 18 years on, she is a highly qualified Sustainability Consultant and valued member of our dedicated Sustainability team. Read our article below to find out more about Jacqui’s career journey and her plans for the future.

Prior to joining calfordseaden, I was working as a ‘Sub-Post Officer Manager’ running a Sub-Post Office in St Mary Cray, Orpington. There were many changes happening within the Post Office at the time with several closures. This encouraged me to start considering alternative career opportunities.

After joining calfordseaden in 2003 as an Admin Assistant, I attended a CPD Seminar on ‘EcoHomes’ presented by calfordseaden Partner, Angela Lemon. This really sparked my interest and I asked if and how I could get involved. Angela supported me by putting me forward for EcoHomes training with the BRE (Building Research Establishment.) After qualifying as an EcoHomes Assessor in February 2004, I began my new role as an Assessor and by 2006, I had expanded the role even further. I am proud to have been instrumental in expanding our assessments to include BREEAM non-domestic, multi-residential and education assessments and managed a small team of assessors. At this time, I also took on the role of Deputy Environmental Manager to Angela Lemon, and worked closely with the Integrated Management Team.

In 2008, our team moved to the newly formed M&E team headed up by Terry Keech. I expanded the scope of the BREEAM Team to cover more non-domestic building types including, offices, retail, higher education, industrial, courts and prisons and ‘other buildings’ and the ‘new’ residential assessment scheme, Code for Sustainable Homes. By 2016, this would also include non-domestic refurbishment and fit-out assessment and the Home Quality Mark.

In 2013, I took on the mantle of Environmental Manager for the practice for a period of five years and along with the other members of the IMS Team, we were successful in transitioning each of our six offices to the new ISO 14001: 2015 standard.

Throughout my career at calfordseaden, I have had the opportunity to work individually and as part of a wider team on a range of major developments, including the six-phrase regeneration of Packington Estate in Islington, the four-phase Durand Estate regeneration, and the Digby Road project which at the time included the UK’s highest living Green Wall.

In more recent years, I am pleased to have qualified as a BREEAM Advisory Professional (BREEAM AP), an On Construction Domestic Energy Assessor (OCDEA) and completed training as a Passive House assessor. More recently, in 2020 I achieved full member status with the Institute of Environmental Sciences and became a Fitwel Ambassador with an interest in promoting strategies for health and wellbeing in buildings. But the learning does not stop there for me! I am extremely keen to expand my knowledge in other areas of sustainability and progress my journey toward Chartered Environmentalist in the future.

calfordseaden has grown significantly since I joined, particularly with the introduction and growth of the M&E Team. I am proud to be part of such a collaborative and committed team. I look forward to continuing our work in delivering sustainable solutions that provide a positive and lasting impact to the communities we work in.