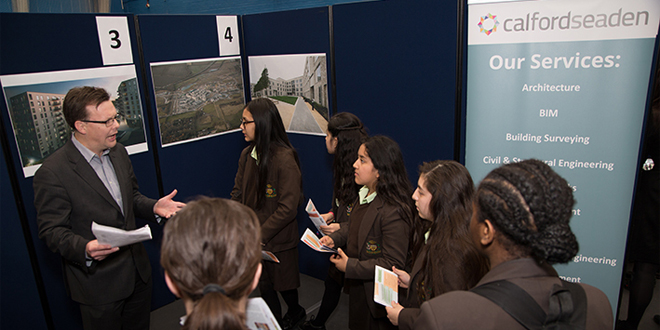 Taking place at the London South Bank University, Charles Hingston, Stephen Rayner and Joe Gasche gave students from schools in the local area an introduction into the world of building surveying.

Charles, Stephen and Joe had students work in two teams to answer building surveying related questions on some of our projects. These included Maydew House, an iconic building in Southwark, Trinity Walk which is a large redevelopment in Woolwich and the North West Cambridge Development, which involves the creation of a new town called Eddington.

The students were asked questions such as how many floors the building has and what they thought the total value of the completed project would be. Working in opposing teams gave the quiz a completive edge and helped the students engage with the type of questions a building surveyor deals with on a daily basis!