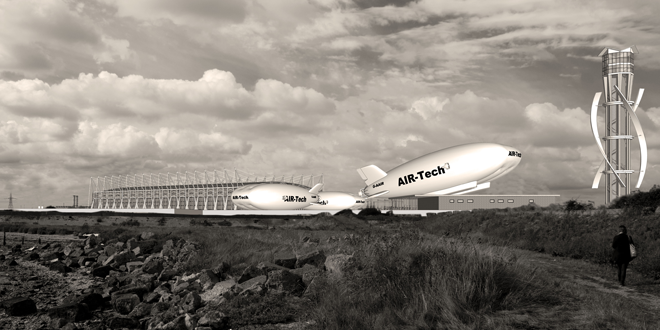 Congratulations to Nathanael Smetham who has passed his RIBA Part II, Master of Architecture course!

Nathaniel has worked extremely hard on his final year design project which was titled ‘A Productive Alternative for Cities’ and was based on the Isle of Grain in Kent. The project began by completing a series of context studies. Each member of the design studio was responsible for one particular aspect including transport, landscape, industry and population.

The purpose of the design was for the development of a production/maintenance facility for supporting off shore wind farms in the Thames Estuary and the North Sea. The aim was to minimise the carbon footprint for wind turbine production by using a sustainable method of transport – Hybrid airships – rather than the current use of sea going vessels which use fossil fuels and are associated with the significant input of greenhouse gas emissions.

The project was based on the site of the former power station on the Isle of Grain. In choosing this site it gives the project a poetic story of a site formally producing energy via fossil fuel, to a site aiding energy production through sustainable and renewable means.

The scheme for the site was designed around the large turbine blades which measure 75 metres in length and the hybrid Airships, based on the Airlander Hybrid Airship, to transport the wind turbine components out to the sites in the North Sea. Influences to the design of the various buildings came from the nearby Thamesport container port cranes, London’s Excel Centre, helical wind turbines and SANNA ferry terminal in Naoshima. As part of the design course for the year the Studio went on a field trip to Japan, in which the SANNA ferry terminal was one of the places visited.