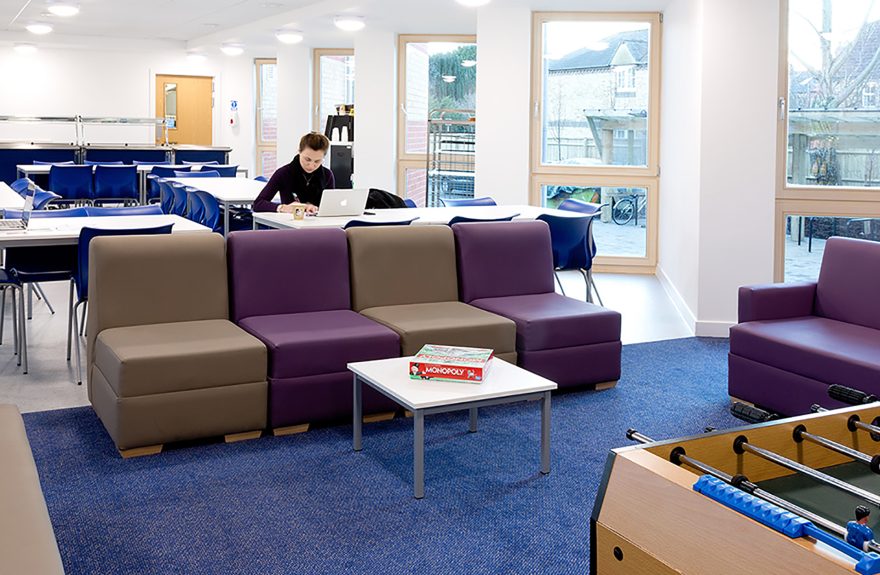 Through the development of Cherwell House, the college now offers excellent high-quality student accommodation in the city centre. The site was challenging to construct on – hemmed in on three sides by residential properties and a railway line on the other side. Delivering materials to the site was one particular challenge for the construction team, requiring agreement from Network Rail before deliveries could start. With tight deadlines and the Local Planning Authority placing great emphasis on sustainability, a contractor that specialised in off-site manufacturing was selected for the project. The contract period was 46 weeks long, with delivery and construction of the two storey building accounting for ten of those weeks.

A pre-fabricated timber frame closed panel system made from treated pine was used, manufactured by Elk. The panels were completely filled with Isover Rockwool insulation, sealed with a vapour barrier and then closed on the inside with 18mm gypsum plasterboard. On the outside, a 15mm cement based particle board encapsulated the timber frame and then a waterproof barrier was applied. On site, a brickwork and render finish was used. In the factory, cut outs were made to reflect the electrical layout defined during the design period, with 25mm conduits within the panels to feed electrical sockets. As well as a panelled system, bathroom pods were used to help deliver high standards throughout the building.

The building was erected and water tight within two weeks of the completion of the structure. Due to the reduced construction programme offered by off-site manufacture, the level of preliminaries accounted for only 12% of the contract sum – compared with traditional methods of construction where we are currently experiencing levels of between 18 – 20%.

The use of pre-fabricated materials reduced the amount of waste produced, during the erection of the building – only six, eight-yard skips of waste were produced.

The use of a panelled system and bathroom pods was a crucial factor in achieving high standards within the tight timescales and this was evidenced during the end of defects inspections, when only 1.09 defects per units were identified. Cherwell House forms part of the redevelopment of Oxford’s West End and is one of the first completed projects. Once the masterplan has been realised, Oxford’s West End is set to become a vibrant city quarter where shops, restaurants and offices will be located alongside homes, public squares and leisure facilities.

For further information on this scheme, including the use of off-site manufacturing, please contact Nick Spiteri.