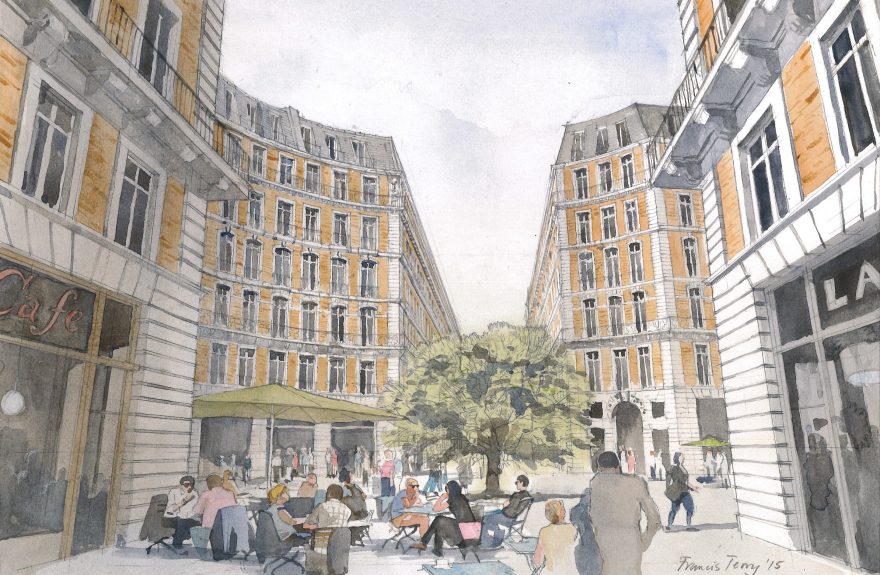 calfordseaden have been working with Create Streets to contest the current planning application for the site at Mount Pleasant in Farringdon, London.

The team is fronted by the Mount Pleasant Association (MPA) and supported by calfordseaden as Architects and Quantity Surveyors. Also on the team are Create Streets, an independent research institute focusing on the built environment, Francis Terry, Architect and son of Quinlan Terry, one of Prince Charles’ most favoured architects, as well as local resident Alexandra Steed.

This contested bid is using the Community Right to Build mechanism which allows local communities to undertake small-scale, site-specific, community-led developments. The original plan submitted by the Royal Mail has received planning approval, but has been opposed by the local community for its ‘fortress-like’ design.

The community bid was submitted earlier this month following extensive public consultation with the local community. The scheme has strong support from residents and backing from a major UK investor, Legal and General as well as a high profile developer.

The scheme is also backed by one of the leading contenders to become the next mayor of London in 2016, Zac Goldsmith MP. His thoughts on the scheme: “building the number of homes that we desperately need in London requires the consent of communities … I hope that when the time is right the Royal Mail Group will look at their submission to buy the site fairly and thoroughly.”

The scheme works on the basis of extending existing routes and desire lines through the site, forming neighbourly streets for residents and the wider community. The community bid creates new open and urban green spaces including a pocket park at the southern end of the site, which is close to the local primary school.

For more information, contact our Head of Design John Spence